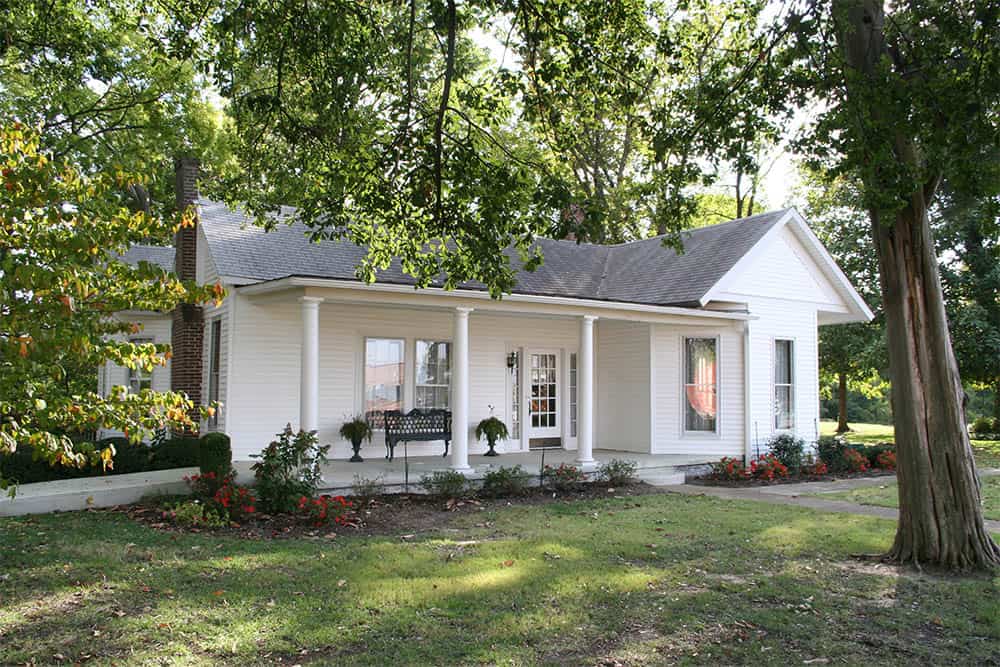 The Wesson House, located on the southwest corner of the Pigeon Roost Avenue/Goodman Road intersection in Olive Branch Mississippi is one of only three Dedicated Mississippi Landmarks in Desoto County - the other two being the Court House and the LaBauve House, both in Hernando.

The site where The Wesson House is located was included in the two sections of land (Sections, 34 and 35) purchased from Chickasaw Indian Chief, Lush-Pun-Tubby by Milton Blocker and Stephen Flinn more than a century and a half ago on April 13th, 1836. In 1840, Blocker traded his interest in Section 35 and $6,400 to Flinn for Flinn's interest in Section 34. The Wesson House is located in the extreme northwest corner of Section 34 so we know the property was owned in 1840 by Milton Blocker. In 1847, Milton Blocker was traveling down the Mississippi River for a cotton-selling trip to New Orleans on the Steamboat, Medora, when the boiler exploded and he was killed.

The next thing we know about The Wesson House site is that some thirty-odd years later, in the mid-1870s, it was owned by Ben F. Wesson, who probably purchased it from Milton Blocker Jr. or from the Blocker estate. At that time Wesson built a mercantile store on the front of the site which fronted Pleasant Hill Road (now Goodman Road). Further back on the property, he built his house which we know today as The Wesson House. We believe the house was built in 1875.

The community of Olive Branch, formerly known as "Cowpens" and "Watson's Crossroads", was incorporated on May 1, 1875, with a population of around 150. Ben Wesson was elected as its first Mayor. He served only one term as mayor until 1877. He would later serve as the City's Postmaster from 1880 until 1888.

The Wesson House, and the store which would stand until the middle of the 20th century, were passed down through the female side of the family through Bet Wesson, Maude Wesson, and finally to Martha Pearl Wesson who was married to Forrest "Red" Langston. Prior to Martha Pearl's death on October 15th, 1987, she indicated to the Mayor of Olive Branch, Milton Nichols, that she would like to deed the Wesson House to the City of Olive Branch to be used as a museum. Following Martha Pearl's death, her husband, "Red" Langston fulfilled her wishes and prepared his will leaving the house and property to the City.

"Red" Langston died in 1991 and, upon probation of his will, the City took ownership of the Wesson House and property and began restoration and preservation efforts on the House which was in immediate need of repair.

The City made an application to the Mississippi Department of Archives and History for historical designation status for the House. It was determined, as a result of modifications made to the House, that it did not qualify for inclusion on the National Register of Historic Places, however, because of Ben Wesson's importance as a historical figure in Olive Branch history, the house did qualify as a Dedicated Mississippi Landmark and that designation was granted.